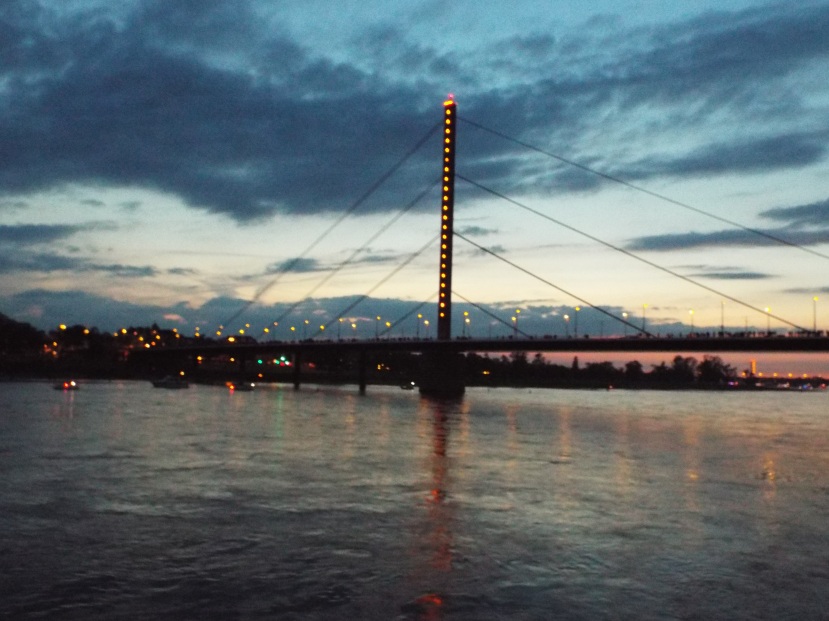 Hey guys!  I hope everyone is doing great and enjoying this warm weather. its officially summer!!!! Yay. So this update is a much needed break from hair updates lol even though it will have some hair elements to it but I will keep it short. So my last travel update I think was a year ago in February, although I did travel to Amsterdam last summer but did not blog about it. This time I went to Germany to visit a few people I met in Spain and I went to two different cities: Düsseldorf and Munich so I will split them into two parts. I am so bummed I could not go to Berlin, Frankfurt, Cologne and Hamburg: time and money! (hey if you want to sponsor me to travel to these places for my blog I would appreciate it lol)

Let’s get started. I have a lot of pictures! Hair element (lol) I decided to go with a hassle free hairstyle as I did not want to travel with a lot of styling products or hot tools (mainly because I could not find my travel adapters and did not want to buy new ones lol), so I went with my short wig already straightened like 3 to 4 times ( as if that meant it would be straighter for longer lol and I would later find out that it would be rainy and there would be no point to it lol. Only products I took was a little bottle of spray leave in conditioner for my hair underneath and some gel for my edges although I never seem to care if they are laid or not when I’m travelling lol). DONE

Rant: OK. So I flew with German wings and never again. First the flight was delayed by about 25 minutes then when we actually boarded we had to wait for another 30 to 40 minutes then when we actually got to Germany we then had to wait another 20 minutes before we  got off the plane! My journey time was prolonged about an 1hour and a half! And guess what the compensation was? A free alcoholic beverage (LOL) but hey I got there safely the end. But never again.

Anyway so I got there and met up with my friend  and later went for our 1st night out. We went to an afrobeats bar/ club in the city center (Please don’t ask me the name lol I can give you directions if you want lool). So anyway the 1st night was good although it drizzled a bit and my hair got ruined lol. We spoke and did a lot of catching up and I also met her another friend. Somehow all the guys in the place were from Cameroon or spoke French and I spoke the same words all night: I don’t speak French/Dutch. (Lol I just remembered this one guy who was German, an older man staring at us for what seemed like the whole night. This man was literally sitting right across us. After he was tired of staring (I guess), he (lol) offered me his drink (LOL) very confidently (LOL) which I declined lol. After dancing for like 10 minutes he goes away lool.).The next day we went round their city center, of course Germany been the hometown of VW, BMW and Audi almost everyone drove one of those cars and the very latest models. In the center they were test driving jaguars and because I had just passed my test I got to drive one too!!!! (Lol jokes!) 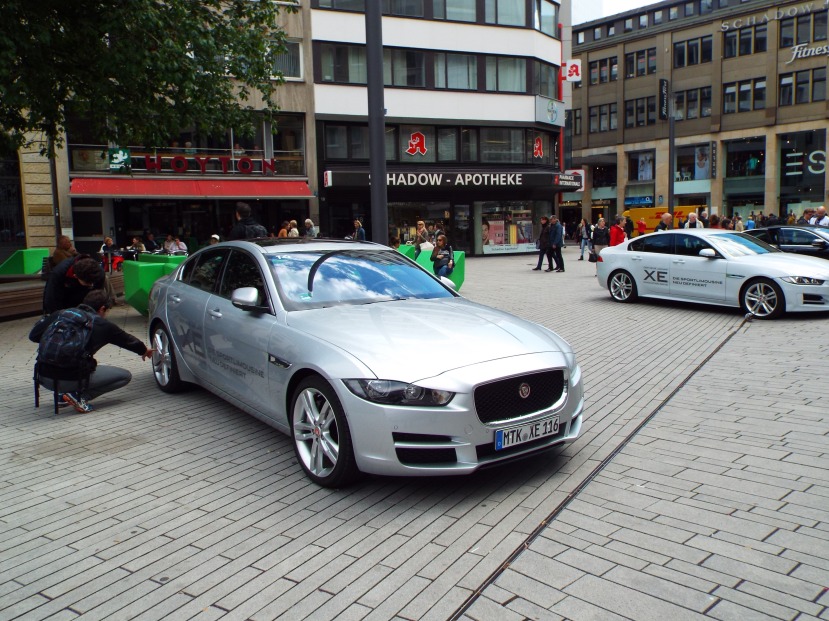 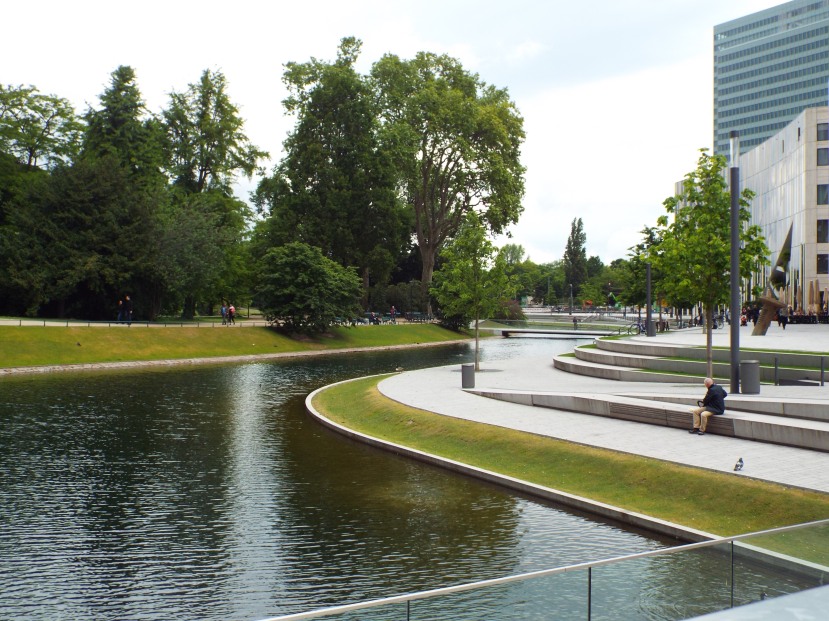 I love the buildings there. Every corner had a mall honestly lol. And designer shops everywhere. The city is really beautiful. Of course been in Germany I had to have sausages lol although they served it in round bread lol. I didn’t drink any beer though hahaa. I saw the tower and did a lot of walking around, I wasn’t there for long so I did as much as I could in 2days 2nightz.  We had lunch in Maredo I would recommend their ribs (so nice but I didn’t even finish it lol). I was lucky to go on the weekend of the Japanese festival in Düsseldorf so the costumes and people were in full gear. Apparently Düsseldorf has a large Japanese population, to think about it I actually saw a lot of sushi places. Although at the festival itself I didn’t see a lot of Japanese maybe they were hiding in costume (hehe). Anyways there was the most amazing fireworks show I had ever seen! The place was packed out I mean, I think everyone in the city was there lol. We were standing on a bridge which I honestly thought could fall. Next time we should get a boat lol (or Diane move to the harbor lol). 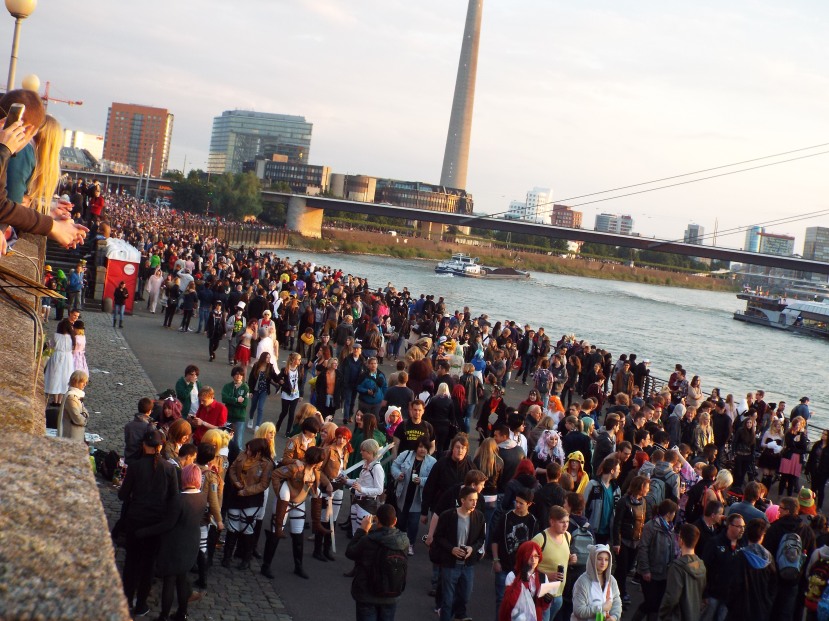 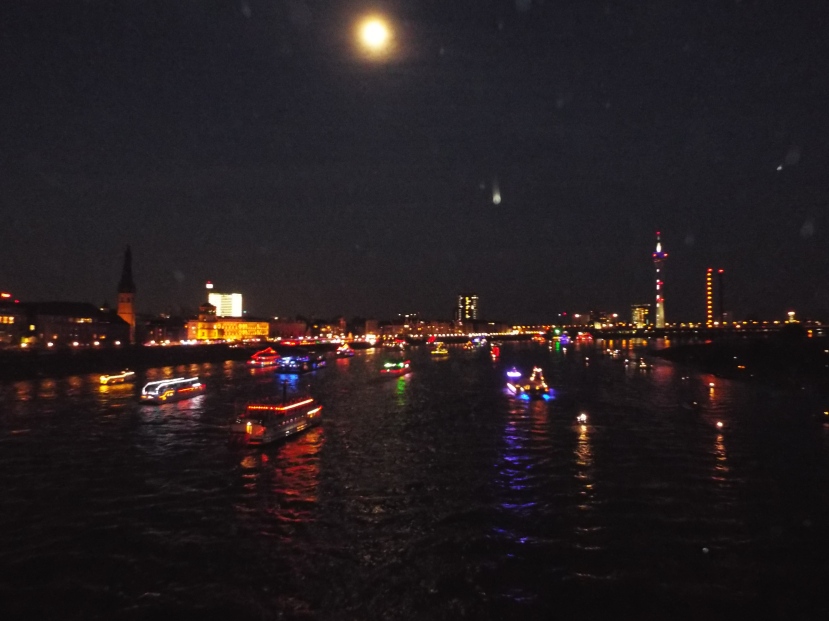 Yes that was part of someone’s outfit. and they were speakers! 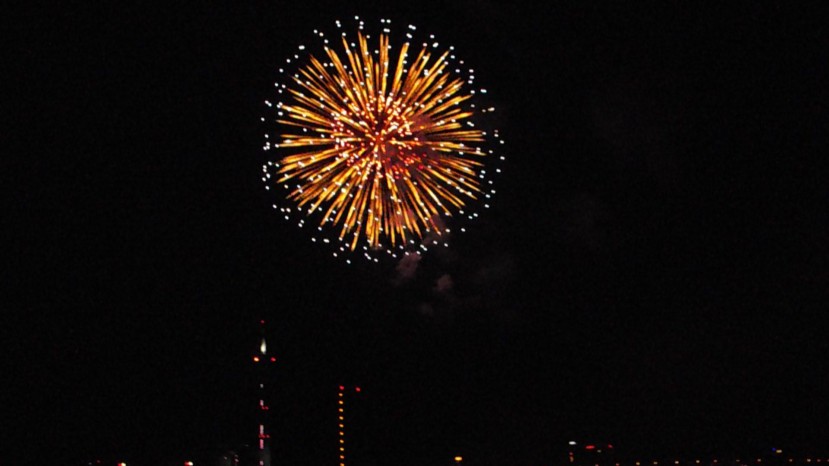 So I had a really lovely time in Düsseldorf with my friend and I just wish I could spend more time there but hopefully I will back to visit.  There is supposed to be a boat show in January hopefully I can make it there.  I left Sunday afternoon for Munich in the south. I booked tickets via the DB website. The whole journey was about 6 hours: 12. 30 to 6.30 pm.  Stay tuned for part two of my Germany travels.

P.S I used my very handy 40L mountain warehouse backpack. A review I did for it can be viewed here >> http://wp.me/p1uQOd-ng. Please consider investing in a backpack if you travel a lot, it will make your life easier!

This site uses Akismet to reduce spam. Learn how your comment data is processed.